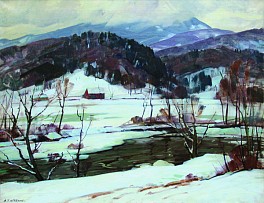 Born in Falmouth, Massachusetts, Aldro Thompson Hibbard received his early art training at the Boston Museum School where he studied with Edmund Tarbell, Frank W. Benson and Joseph DeCamp.  Due to his exceptional talents, Hibbard received a Paige Traveling Scholarship (1913-15) to study abroad.  He was also proficient in the sport of baseball and was invited to play professionally, but in 1915, decided to pursue a career as a professional artist and was employed as an art instructor at Boston University.

Beginning in the 1920s, Hibbard resided in the Cape Ann, Massachusetts area and spent his winters in Vermont and Jamaica.  Vermont was the locale of many impressionistic winter landscapes for which Hibbard is best known.  In fact, he was so adept at painting snow scenes, a review in the Boston Globe for the 1918 Guild of Boston Artists exhibition noted: “Hibbard is a realist; you feel the reality of everything he paints, but the sentiment, the poetry is there also.  Others paint snow that looks like white paint streaked with blue and yellow. Hibbard paints snow that never looks like anything else but snow...he is...more subtle and more penetrating in his observation of delicate nuances of gray, [and] the phenomenon of light on snow.”