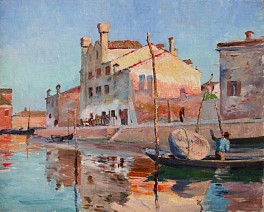 A Career Ended at Midday

When Allen Butler Talcott (1867-1908) died at age 41 from an apparent heart attack, he left behind his four month old son, Agnew, his wife, Katherine, and innumerable grief-stricken friends, nearly all of them fellow artists connected somehow with Miss Florence’s boarding house in Old Lyme. William Henry Howe summarized the lament of the artistic community when he wrote to Miss Florence, “I cannot express to you my shock at hearing the death of Talcott…[h]e had so much to live for & a bright future.”

Talcott died on the verge of becoming one of the major artists of his time. Originally influenced by the Barbizon movement, he had placed two paintings, Cabano en Provence and La Crois de Billiers, in the Paris Salon of 1893. He showed another, Autumn, the following year. His work appeared regularly at the National Academy, the Pennsylvania Academy of Fine Arts, the Carnegie Institute, and the Society of American Artists. In 1904, he won the Silver Medal at the St. Louis World’s Fair for a group of four paintings, which included Early Spring and The Pasture Oaks.

Modern curators, dealers, and collectors mourn Talcott for the works he never created. But his contemporaries – Frank Dumond, Henry Ward Ranger, Charles Vezin, and others – mourned the loss of a man who championed the ideals that they, as a group of painters united in forging a movement, were trying to uphold. Away from their insular colony, even the art world at large was aware of Talcott’s influence. The New York Herald offered this assessment in his obituary: “Art the world over is at present passing through phases which might throttle forever anything less vital than art. It is the taint that shows in certain works of sculpture, certain operas, certain writers, who appear, for example, to regard maternity – either the holiest thing or the most tragic – with a leer, and the moral of whose writings is that chastity is bourgeois. That art does not die of this corruption is due to men like that group of American painters who, influenced by all that is good in the past, are painting today in their own way the beauty of this land of ours, the landscape painter’s paradise. Of this group, Talcott was a loved and honored member. To turn from the flood of degeneracy to such art as his is like the morning plunge after a night of hideous dreams.”

Loquacious praise, to be sure. But The Herald’s comments suggest what is evident in the paintings that comprise this exhibition – that Allen Butler Talcott drew something spiritual from the meadows and marshes of Old Lyme and channeled what he discovered into his artwork.

Talcott’s nature was a marginalized space. He tended to paint at the beginning or the end of the day, as well as the beginning or the end of the seasons. He was particularly influenced by the Connecticut River Valley’s great variety of trees and would often choose one standing alone, as he did for Old Oak by the River, to invoke a sense of self-reflection. To create authentic bark textures, Talcott would invert his brush and drag the blunt end through his rich impasto. Charles Vezin once said, “no one was [Talcott’s] peer in the knowledge of trees and how to paint them.”

Also included in this exhibition are paintings such as Meadows in Autumn, which demonstrates Talcott’s command of the season’s palette, and Afternoon on the Palisades, one of Talcott’s largest works, which features a dying tree teetering over the edge of the Palisades illuminated by, and in contrast to, the early light of Spring filling the Hudson River valley.

Talcott’s paintings share with the viewer the personal quiet the artist experienced in nature, often elevating landscape to an expression of moral philosophy. As hints of Impressionism crept into Talcott’s work after 1903, time became synonymous with light, charging his work with an individual luminosity.