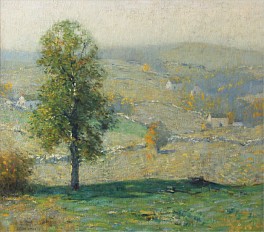 Born in New York City, Bruce Crane moved with his family to New Jersey in 1874.  In 1877-78, he studied art with Alexander Helwig Wyant and worked in the Catskill and Adirondack Mountains.  Several trips to Europe introduced Crane to Barbizon painting, and the artist pursued art study with Jean Charles Cazin at Grez-sur-Loing.  Crane brought these influences to Old Lyme, sometime around 1904, and he became one of the leading practitioners of American Tonalism.  Other artists in this group included J. Francis Murphy, Henry Ward Ranger, Dwight Tryon, Homer Martin, George Inness, and Wyant.

Theirs was a very personal approach to landscape painting that has been aptly defined by scholar Mary Muir.  States Muir:  “More than literal transcriptions of perceived visual truth, Tonalists were concerned with conceptual truth based on a personal response to a familiar nature, preferably that of one’s native land.”  Tonal painting, furthermore, is characterized by the predominance of a single tone throughout the work, which tends to produce paintings marked for their poetry and mood.