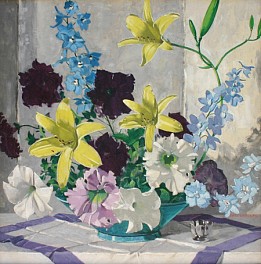 Fellow artists from the Pennsylvania Academy, Kenneth Bates and Gladys Edgerly also participated in the traveling scholarships becoming acquainted with Carl Lawless at the time.  Bates and Edgerly were married in 1923 and soon thereafter bought a home in Mystic, to which were invited friends of their student days in Europe.

Following his return from Europe Lawless lived for a time in Pennsylvania.  Upon a visit to Mystic with the Bates in their new house, the village made such a favorable impression that he decided to move here.  Property was purchased off Orchard Lane where he established a personal residence.

The growing art association intrigued him, and he became active in it.  Friendship with Charles H. Davis was a factor in helping him develop his style of landscape and still life painting.

With the association starting to take actual shape, Lawless assumed an active interest becoming its treasurer.  He was also a member of its exhibition committee for the opening exhibit, which would open the new gallery building in July 1931.

The gallery grounds had been disturbed by the recent construction and Lawless assumed responsibility for transplanting trees and replanting summer flowers from his own and other gardens.  An entire side lawn from the Bates’ residence was dug up, removed and then relocated at the gallery.

Before coming to Mystic he had begun to exhibit his work with prestigious prizes and awards being made.  He had become a member of the New Haven Paint and Clay Club, the Connecticut Academy of Fine Arts and the Mystic Art Association.  His work is in the collections of the Pennsylvania Academy of Fine Arts; the Carlisle (PA) Museum; the New Haven Public Library; the University of Connecticut, and the Mystic Art Association.