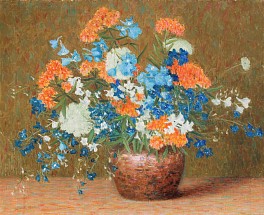 Born in Riverside Connecticut, Dorothy Ochtman became a renowned still life, portrait and landscape painter. Her parents were artists Leonard and Mina Fonda Ochtman. She earned degrees from Smith and Bryn Mawr colleges and then studied art with her father and at the National Academy of Design in New York. On a Guggenheim Fellowship, she studied in France in 1927 and 1928. In 1922, she became a member of the National Association of Women Artists and was also elected an Academician of the National Academy of Design where she showed her work in 43 annual exhibitions.