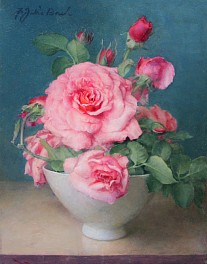 Florence Julia Bach was an American painter and a native of Buffalo, New York. She was born June 24, 1887 to John Lewis Bach and Julia Spies Bach. At an early age Miss Bach displayed a marked aptitude for drawing. In her childhood, the paper dolls she painted were the envy of her playmates, and she used to wish that the school session was one interrupted drawing period.

She was educated in the Buffalo public school and had private instruction at the Mme. Farine School of Speech. She studied art with Professor Carl Wachter at the University of Buffalo. Following her graduation from Lafayette High School she enrolled in the Buffalo Art Students League. Her talent won immediate recognition, and she was awarded a scholarship to continue her study at the Art Students League of New York City under William Merritt Chase, the best known American portrait painter at that time, and under Frank Vincent DuMond. Later, in 1925 she studied modeling at the Ecole de Beaux Arts, Fontainebleau, France under Monsieur Le Jeune. In the early 1930's she went to Italy for further study.

An artist of long experience, she had for years enjoyed recognition for her skill in floral portrayal. Miss Bach, working from nature, produced clear, accurate, realistic paintings. She spent many of her summers at the farm of her aunt, Mrs. Anna Phelps, near Bethel, Connecticut, and it was there that she painted many still life and flower studies.

Miss Bach once said that "Any intelligent person can learn to draw, but that does not mean that anyone can become an artist. For the artist must do more than reproduce what he sees - he must interpret - give something of himself to his painting." Miss Bach had a rare privilege of viewing art from every angle. As instructor in the School of Fine Arts in Buffalo for 29 years, she observed the early stages of its development in the work of her students. As President of the Buffalo Society of Fine Arts, she was afforded an exceptional opportunity to see the outstanding paintings produced there. As artist and sculptor, she knew the satisfaction of creative achievement.

In 1943, taking a leave of absence, Miss Bach moved from New York to Bethel, Connecticut with Mrs. Evelyn C. Murnam. After recovering from a broken hip she returned to live in Manhattan in 1945. Years later she moved to Greenwich, Connecticut, and in 1970 she was teaching one day a week in Greenwich, Connecticut. For recreation, Miss Bach enjoyed her walks and reading about history and the lives of artists. Her favorite food was Italian, particularly spaghetti but she also loved chow - mein. She spent her last years enjoying her gardens and her love for cooking. She will be remembered by many with sincere respect and abiding affection.

By James Wyatt Earp. Most of the information from his biography of the artist, written from articles from old newspaper clippings and magazines, and personal letters of the artist.