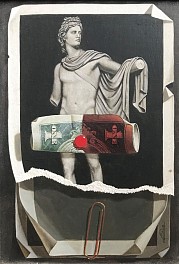 Gary Erbe is self-taught painter was born in 1944 in Union City, New Jersey where he maintained his studio from 1972-2006.

Unable to attend art school, he worked as an engraver from 1965-1970 to support himself and family, painting at nights and weekends to develop his skills. In 1967, Erbe discovered Trompe l’oeil painting and its masters. It was then that he recognized his particular place.
In 1969, Erbe conceived a way of creating paintings that would be more contemporary and a departure from the 19th Century Trompe l’oeil masters. By freeing objects from their natural surroundings via the illusion of levitation and through the juxtaposition of objects that in reality had no relationship, he could create thought provoking paintings. In the same year, Erbe coined the term “Levitational Realism”. In 1970, Erbe decided to pursue his art full time and began to actively exhibit his work.

Erbe has also garnered many awards and honors over the years including an unprecedented 6 Gold Medals at The Allied Artists of America, Inc. Annual Exhibitions held at The National Arts Club, NYC. He also received the Medal for Lifetime Achievement in American Art from The Butler Institute of American Art, OH and the Salmagundi Club Medal of Honor, NYC. He also received the Gold Medal from The National Museum of Sports, IN; First Prize Award from The National Arts Club, NYC and Gold Medal of Honor from Audubon Artists, NYC, First Prize from The Peto Museum, NJ amongst others.

Erbe’s work combines flat space forms that are exaggerated and enhanced by shadow, light and color. The result is pure three-dimensional illusion. While there are and will always be elements of Trompe l’oeil in his work, he has less of an interest in fooling the eye in favor of stimulating the mind. Erbe was honored with a 25 year traveling retrospective in 1995 and a 40-year traveling retrospective in 2010. The Butler Institute of American Art, OH has published a scholarly written 300 page hard cover book on Erbe’s art and life titled “Footprints: The Art and Life of Gary Erbe” in conjunction with a planned 50 year retrospective exhibition in 2017 which will travel. Currently, Erbe maintains his studio in Nutley, NJ.  He continues to actively paint. To learn more about Erbe and his work, visit: www.garyerbe.com