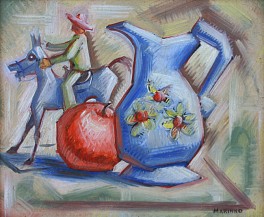 In the early 1930s, George Marinko, was known as one of the most pure surrealists of all the American artists pursuing that pioneering style.  He also did automatic drawing that revealed through his personal complex symbolism his interest in mythology and psycho-analysis.  Many of his works had allusions to the temptations of Adam and Eve and other suggestions of male/female conflict.  His images seem dreamlike and include clowns, humans, dolls, and puppets as well as objects that are bending and twisting, and "any one of them may be running, burning, or melting" (Falk 2185).

Marinko's paintings were included in the ground breaking 1936 Surrealist exhibition at the Museum of Modern Art in New York, but he choose to stay out of the limelight and lived quietly in Waterbury, Connecticut where he was known for his works in sculpting, lithography, and painting with subjects of landscapes, villages, boats, as well as abstraction. In Waterbury he was a prominent local artist, teacher at the Waterbury Art School from 1945 to 1957, and later became director of the Hudson River Museum.  He also painted the mural in City Hall's Aldermanic Chambers along with artist Francis Jmanie.

Marinko studied at the Waterbury Art School with Lewis York from 1925 to 1929 and took additional training at the Yale University School of Fine Art with Eugene Savage.  He began his career as a painter of traditional landscapes, but from 1934-42, painted in the Surrealist manner.  Frustrated with the lack of response to his surrealism, he incorporated regionalist landscape painting into his output, but continued to paint abstract works.  He also took up the depiction of surrealist images by carving and painting wooden masks and totems and other primitive figures.

He served in World War II, and In the late 1950s, moved to New Haven, Connecticut where he lived in a small apartment crowded with his work.  He died in New Haven in 1989.