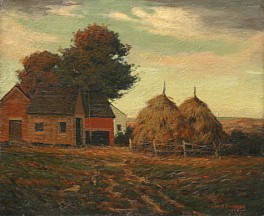 The son of immigrants, George was born and raised in New York City where he began a lifelong career in art.  In 1886, the year that he enrolled at the Art Students League, George made his first trip to Essex, Connecticut where he was inspired to paint. In 1900 when the Lyme Art Colony was officially formed, George was spending time in Hadlyme.

He is best remembered for his small and intimate oils of the Lyme countryside.  His distinctive hybrid style was the result of a broad spectrum of influences.  Inspired by the French Impressionists, George became impassioned with painting the effects of sunlight.  In addition, George was influenced by the academies that he attended in New York and Paris where he developed an expertise in drawing as well as a fondness for the work of Corot.  His exposure to these various sources blended with certain regional influences through the free exchange of ideas that characterized the art colonies and clubs of the day.  As a result, his adaptation of Impressionist techniques, combined with a stylistic tendency toward favored structural forms and compositions of the Lyme landscape, gave George’s work a uniquely American flavor.