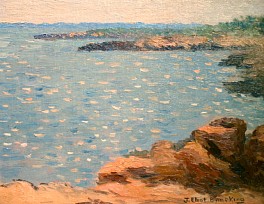 He studied at the Cowles Art School, the Art Students League in New York, and the Boston Museum School with Joseph De Camp (1858-1923), Frank Weston Benson (1862-1951) and Edmond Charles Tarbell (1862-1938). Enneking then opened a studio in Brookline, Massachusetts, not far from Boston, painting around Mill Pond, a quiet wildlife refuge. A prolific painter, he is best known for his masterful ability to capture the spirit of bustling beach scenes, quiet paths through woods, and the light at sunset in along the New England coast.