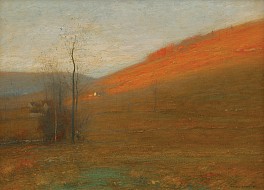 “[John Francis Murphy’s] landscapes show a calm unconcern for the complexities of nature. They are stronger for being so simple.”

John Francis Murphy, a self-taught artist, once said, “I paint the woods I saw as a boy.” The woods he referred to were those in and around his hometown of Oswego, New York. As an established member of New York City’s artistic milieu later in life, he would return to the countryside for eight months out of the year. During that time, however, he did not paint; instead, he absorbed the details of the landscape and produced his artwork from memory during the winter months, sacrificing the accuracy of specific details in exchange for the beauty of color, line, feeling, and mood. (1)

Murphy spent summers from 1887 at Arkville, New York in the Catskill Mountains, and the presence of Alexander Wyant (1836- 892) between 1889 and 1892 had a pronounced influence on Murphy’s development as a Tonalist. His compositions characteristically combine observation and memory; the forms dissolve into each other as if quickly viewed in a passing glance, enveloped in an atmospheric haze. Murphy first exhibited with the National Academy of Design in 1876, was elected an associate member in 1885, and made a full member two years later. He was also a member of the American Water Color Society, the Society of American Art, and the Salmagundi Club.