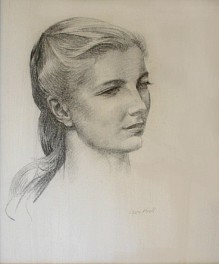 Leon Kroll was a painter, lithographer, art critic and teacher who was born in 1884 in New York City. Living his professional life in New York City and Chicago, he summered in Rockport, MA and became one of the most popular and famous of its painters by 1920.

Kroll studied at the Art Students League in New York City and with John H. Twachtman in 1901, the National Academy of Design in 1903 and the Academie Julian in Paris from 1908-1909 with Jean Paul Laurens.

He was an Associate (1920) and full Academician (1927) of the National Academy of Design; a member of the New Society of Artists; Philadelphia Art Club; American Society of Painters and Sculptors (president, 1931-1935); Boston Art Club; National Institute of Arts and Letters (vice-president, 1943); American Academy of Arts and Letters (1950, director and chairman of the art committee); Woodstock Art Association; and the National Art Club (life member).

His first solo exhibition was given in 1910 at the National Academy of Design and many followed.

He was commissioned to do murals for the U.S. Military Cemetery, Omaha Beach, France and the John Hopkins University Auditorium. He was a teacher at the National Academy, the Maryland Institute of Art, the PAFA and the Arts Student League and painted in Gloucester by 1912. He became a close friend of Chagall and R. Delaunay in France and in 1917 he went to Santa Fe to join Robert Henri and George Bellows on painting excursions. By 1920, he was one of the most famous realists in America and in 1937 he was given a retrospective exhibition at the Worcester Museum in 1937.