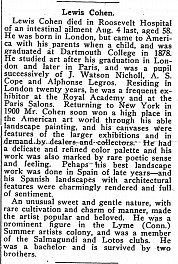 Lewis Cohen was born in London. After graduating from Dartmouth College, New Hampshire in 1879, Lewis Cohen developed his artistic talents with travel to the Adirondack Mountains and a five-year residency in Colorado Springs, Colorado. His first formal art instruction came in 1884 when he returned to his hometown of London, England. He remained in Europe for nearly twenty years, and exhibited in Paris and London. Cohen settled in New York City in 1904, where he had been raised, and purchased a cottage on Sill Lane in Old Lyme in 1909. In 1911 Cohen was elected an Associate Member of the National Academy of Design.  He was also a member of the Salmagundi Club and in 1915 at the San Francisco Exposition was awarded the Silver Medal in painting. His association with the Old Lyme Art Colony had a tremendous impact on his work: the intimate, plein air scenes of Connecticut produced between his first visit to Old Lyme in 1900 and his death in 1915 deny his original training as a genre and portrait painter.