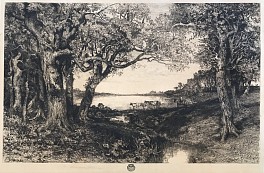 Born in Strathaven, Scotland, Mary Moran established a reputation as one of the foremost 19th-century landscape etchers in the United States. Many of her etchings were made on location directly onto the copper plate. She finished about 70 landscape etchings that included scenes of England and Scotland as well as New Jersey, Long Island, Pennsylvania and Florida.

Her father, Archibald Nimmo, was a weaver, and when her mother died when Mary was five years old, the father brought her and her brother to America where they settled in Crescentville, Pennsylvania, near Philadelphia. They were neighbors of the Moran family whose son and panoramic landscape painter, Thomas, she married in 1862.

Mary learned to draw and paint in oil and watercolor from him and made her first etching in 1879. Soon she was exhibiting at the Pennsylvania Academy (1878-1889) and in New York at the National Academy of Design (1877-1896). Other exhibition venues were the Boston Art Club, Brooklyn Art Association, and the Women Etchers of America exhibition at the Union Club in New York.

She worked primarily on the East Coast and Florida but also in Europe. The Morans had three children, and with their family, they painted in France, Italy and Switzerland in 1867. Upon their return, Thomas Moran's painting "The Grand Canyon of the Yellowstone" sold for ten-thousand dollars, and they used the money to buy a home in Newark, New Jersey. Mary Moran did many paintings of the surrounding New Jersey countryside, managed the business aspects of her husband's career, and ran a drawing school for children.

Because of poor health, she could not accompany her husband on his many western trips. To occupy her in addition to her painting while he was away, Thomas Moran gave her copper plates and suggested that she take up etching. When he returned, he was so pleased with her work that he submitted then to the New York Etching Club. The positive reception was immediate. "Mary Moran had indeed found her metier; she worked furiously, and in the 1880s, was recognized as the leading American woman etcher." (Rubinstein 71).

She was elected to the New York Etching Club and to the Society of Painters and Etchers in New York. In 1881, in recognition of her printmaking abilities, she was elected an original fellow of the Royal Society of Painters-Etchers, the only woman among 65 members. English critic John Ruskin gave her much praise for her entries as did other critics.

In 1893, she won a medal at the World's Columbian Exposition in Chicago for her prints. Six years later, she died at age fifty seven from typhoid fever, having exhausted herself by nursing her daughter through the same illness. The Smithsonian Institution held a retrospective of her work in 1950.