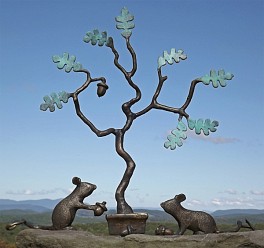 Michael McLaughlin studied a classical approach to drawing and composition at the Lyme Academy about a half a mile down on Lyme Street from The Cooley Gallery. From there Michael furthered his studies through an apprenticeship in the studio of sculptor, Juan Andreu. Juan later inspired Michael to travel to Thailand, Korea and Japan to further continue his course of study. The gift in Michael's art is in its approachability even while it asks the tough questions.

Michael's sculptures are often allegorical narratives about the harmony and interdependence found in nature. It often suggests re-birth, longevity and the fragile balance found in nature. He often casts found objects collected while hiking such as mushrooms, pinecones, leaves and even whole branches. He examines the simplicity and complexity which co-exists by way of the creative spirit using a traditional medium in a refreshingly innovative manner.
- Pamela Siemon

It is the many faces of nature that engages and provides me a sense of certitude in my life and work. Nature is fluent in the lessons it offers and is an ever-expanding facility that translates new dimensions of expression exponentially. Sometimes these assertions are self-contained while many others are open-ended. For myself, it is an evolution of understanding. There is an old Asian proverb that says, "If you wish to hear the temple bells, listen to the sound of the sea. If you wish to see God, look attentively at creation." My rationale is to reveal and acknowledge a unique expression that will ultimately develop or facilitate deliberate meaningful appraisals.
-Michael McLaughlin
Michael's works can be seen at Mystic Aquarium and was part of the Connecticut Governor's mansion art collection. He has received numerous public commissions around the United States. Michael lives and works in Connecticut.