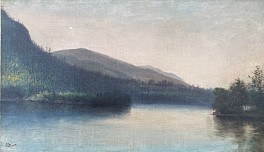 Nelson Augustus Moore was born in August, 1824 in Southington, Connecticut.[1] Six years later his family moved to nearby Kensington where Moore remained for most of his life and career. The undulating hills and deep woods of central Connecticut offered Moore ample opportunity to explore his early love of painting and the methodical study of the properties of light. Moore worked outdoors in every season, faithfully painting the scene and capturing the atmosphere of various New England locales. Throughout his career he was steadfastly loyal to a meticulously naturalistic style of landscape and seascape painting, despite the rise of American Impressionism towards the end of his life.

By the time Moore discovered his innate artistic talent and decided to move to New York in order to study in earnest, the city had become the center of a lively, creative, and successful world of American art. Art patrons sought after artworks that captured the natural beauty of American landscapes in an era of rapid industrialization, and unspoiled nature, both actual and illustrated, was in higher demand.

He was trained as a portraitist by Thomas Seir Cummings, who stressed the importance of likeness. It was an easy transition for Moore into portrait photography when he was presented with the opportunity to purchase a daguerreotype studio in New Britain, Connecticut. In 1861, after a decade as a successful photographer in New Britain and then in Hartford, he sold the studio and moved back to his hometown of Kensington. He began to devote himself to painting once again.

Moore chose to paint in places where wealthy city-dwellers summered on the edges of pictorial wilderness, such as Lake George, Rhode Island, and towns on the North Shore of Massachusetts, such as Gloucester.

Moore had firm ideas about the qualities of a good painting. ‘Works which stand the test of time are those which have been painted and finished with great care.’ In extensive notes for several lectures, [he] wrote that a painting must not only be ‘truthful,’ it must make the viewer ‘feel what the artist intended to represent.’[2] Many of his landscapes over the scope of his fifty year career show his work to match his words.

Best remembered for his career as a Hudson River School artist, his lush and sometimes luminist Connecticut and Lake George landscapes rank with the work of his Hartford-based colleagues John Lee Fitch (1836-1895) and Charles DeWolf Brownell (1822-1909).