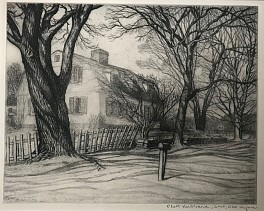 Hubbard was a painter, etcher and architect. Born in 1889 in Columbus, Ohio, his early arts education was in painting and drawing at the Columbus Art School.  Later on he studied with Robert Henri in New York. Platt maintained a studio in Paris from 1911-1932 and was a frequent visitor to Old Lyme eventually moving into a house on Sill Lane. He was a consistent exhibitor at the Art Association in Old Lyme from 1915-1943 as well as with the Society of American Etchers. Hubbard died in Lyme on May 7th, 1946.