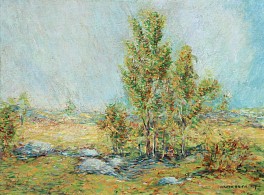 As a boy, Walter Griffin watched his craftsman father plane and scroll wood into decorative objects, which were much sought after by the residents of Portland, Maine. Griffin began sketching his father’s associates and, by his early teens, displayed enough talent for drawing that his father sent him down to the School of the Museum of Fine Arts in Boston, where Griffin studied under Emil Otto Grundman (1844-1890) in the same class as Edmund Tarbell (1862-1938), Frank W. Benson (1862-1951), and Dennis Miller Bunker (1861-1890). His education continued at the Academie Julian in Paris, where Griffin was first exposed to the Barbizon style that would form the foundation for his shift toward impressionism.

In 1897, Griffin returned to New England to accept a position as the director of the School of the Society of Art in Hartford, a lofty post in the Connecticut art community previously held by Dawson Dawson-Watson (1864-1939), among other notable artists. Griffin remained in Hartford while the art colony at Old Lyme solidified between 1899 and Childe Hassam’s (1859-1935) arrival in 1903. In 1905, Griffin finally headed south and took up permanent residence in Old Lyme. Griffin’s close friendship with Hassam had a significant impact on his style. His previous work had been marked by relatively long lines in muted tones. After meeting Hassam, his technique became “a sketchy application of small mosaic-like brushstrokes.”

Griffin was elected as an Associate in the Academy in 1912, and an Academician in 1922. He spent the majority of the final decades of his life living and working abroad, including Norway, France, and Venice. He settled in Portland, Maine in 1933 and continued to paint until his death in 1935.