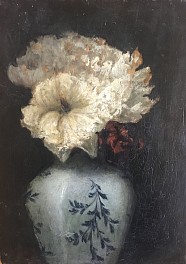 “William Gedney Bunce has a manner of his own. Whether he works in oils, water-colors, or pastel, he preserves his individuality, his wonderful aerial perspective, his luminosity, and his delicate feeling for color. I will only say that we should have to go back to some of the great masters, to the recognized adepts in color, to find these qualities, which he possesses, at their best.”

William Gedney Bunce, a native of Hartford, Connecticut, is especially known for his sentimental views of Venice, Italy. The distinct use of color and lack of familiar details in his paintings serve to reproduce the poetry and atmosphere of his location, rather than provide a factual representation. Bunce arrived in Venice after years of study, first in New York City with William Hart (1823 – 1894), and later in Paris, Munich, and Antwerp. He was a member of the National Academy of Design and the National Institute of Arts and Letters, and exhibited in New York, London, Rome, Paris, and Munich. He died in Hartford at the age of seventy-four from injuries sustained in an automobile accident.