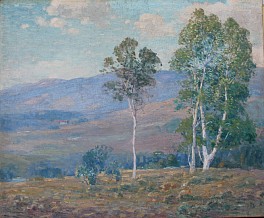 Born in East Gloucester, Massachusetts, William S. Robinson became a talented and successful marine and landscape painter. While his early childhood influences prove elusive, his relatives remember him as being a stereotypical Yankee: self-reliant and determined. To those closest to him, he was generous and kind. The paintings in this exhibition are fine visual accounts of Robinson’s gentle and poetic nature.

Robinson studied painting at the Massachusetts Normal Art School and was teaching art in the Boston area in the early 1880s. After a brief teaching position in Maryland, he had the freedom to pursue his studies in France at the Academie Julian. Inspired by his experience there, Robinson submitted his first painting in New York at the National Academy of Design in 1891. Robinson never had the financial freedom to abandon teaching.  In the 1890’s at the Pennsylvania Academy of Fine Art, the Drexel Institute, and the Columbia University Teachers College. During this period Robinson’s paintings were heavily influenced by the Barbizon style he developed in France.

While in New York, Robinson was elected to the National Arts, Salmagundi and Lotos Clubs. In 1900, at the Paris Exposition, among contemporaries such as Sargent, Eakins and Homer, Robinson submitted a painting that won an Honorable Mention.  He was awarded medals and recognition at prestigious exhibitions around the country for the rest of his life and his paintings would be in the permanent collections of the Carnegie Institute, Dallas Museum of Art, the Cleveland Museum of Art and the National Gallery.

Around 1905 he started coming to Old Lyme. Robinson’s paintings were becoming more atmospheric and the brushwork was more spontaneous and broken following the lead of Childe Hassam and the interest in Impressionism that pervaded the American art scene.

By 1921, Robinson lived in Old Lyme year round. He remained active in New York and was president of the New York Watercolor Society.  His true love however, was painting the Connecticut countryside as is evident in his spring laurel paintings and evocative celebrations of autumn. He was one of the founders of the Lyme Art Association and would serve as its president for many years. Robinson also taught at Connecticut College from 1928 to 1934.

Robinson left Old Lyme for Biloxi, Mississippi in 1937, the same year Florence Griswold died. While Impressionism’s delicacy gave way to the harsh realities of the Depression and the artists of the WPA, Robinson’s style shifted only very slightly towards these changes. His canvases remained extraordinarily light-filled with only slightly bolder strokes but his subjects reflected an interest in a less romantic and more descriptive look at the world of Biloxi.

Robinson won numerous awards throughout his career. Why his name virtually disappeared from the American art scene so soon after his death is a mystery because the quality of his painting endures. Why history remembers or forgets a particular artist is a question for endless speculation. For Robinson, it may be because he was childless, uncomfortable with self-promotion and loyal to a painting style that had fallen out of fashion.  Fortunately, time and talent transcend such barriers and give way to a new and lasting appreciation of an artist’s impressive career and enduring talent.