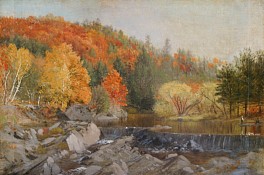 Born in Francestown, New Hampshire, Hudson River School painter, Aaron Draper Shattuck moved to Lowell, Massachusetts, as a young boy.  In 1851, he studied portrait painting with Alexander Ransom in Boston, and, in 1852, he moved to New York City, where he studied art at the National Academy of Design.  Aaron Draper Shattuck ranks as a first class artist of the 2nd generation Hudson River School. He exhibited regularly with such artists as John Kensett and Samuel Colman.

Every summer from 1854 to 1860, Shattuck took sketching trips to the White Mountains of New Hampshire, and many of his landscape paintings are depictions of that mountain range.  He also worked in other picturesque spots in New England, New York, and West Virginia.  His love of nature was translated into small, detailed paintings, highlighted with elm trees, luminous sky, and rough New England rocks.  In 1870, the artist and his family moved to Granby, Connecticut, and his work from the 1870s and 1880s featured the pastoral setting of his farm with livestock.  By 1888, after an illness, Shattuck abandoned painting almost entirely.