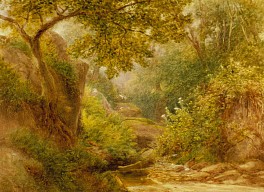 Albert Fitch Bellows was a gifted landscape and genre painter, known for oils and watercolors that were gentle and peaceful in mood.  He was born on November 29, 1829 in Milford, Massachusetts, where he began his career as an architect.  He gave up this profession in 1850 to serve as the principal of the New England School of Design in Boston.  Six years later, he decided to pursue a career as a full-time painter and during a trip to Europe in 1857, he studied at Antwerp’s Royal Academy of Art.  Within the year, he returned to the United States and settled in New York City.  There, working in the realist manner of the Hudson River School, he portrayed scenes of life in old-time New England and landscapes based on sketches made during his trips to Vermont, Maine and Connecticut.  He took up watercolors in 1865, and his works in this medium brought him considerable renown in the years that followed.  He was one of few foreign artists elected to membership in the prestigious Royal Belgian Society of Water-Colorists, and was the author of the influential book, Watercolor Painting:  Some Facts and Authorities in Relation to its Durability (1868).