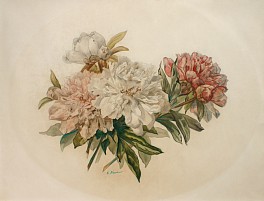 Elizabeth Nourse and her twin sister, Adelaide, were born in Mount Healthy, Ohio, a suburb of Cincinnati. In 1874 at the young age of fifteen, Elizabeth began art studies at the McMicken School of Design, which later became the Art Academy of the Cincinnati Art Museum. During her seven years at the school, she studied drawing, watercolor, oil painting, woodcarving, painting on china, and sculptor.

Although she did not study with Frank Duveneck, a student of the Munich School and Cincinnati's most famous teacher, Nourse became aware of Duveneck's influence and began to incorporate his rich painterly technique into her work. After the marriage of her twin sister and the death of her parents in 1822, Nourse went to New York and studied with William Sartain. She returned to Cincinnati and began to support herself by selling her artwork.

In 1887, Nourse and her sister Louise traveled to Paris, where Nourse studied for three months with Gustave Boulanger and Jules Lefebvre at the Academie Julian and received advice from Jean Jacques Henner and Carolus-Duran. Her painting La Mere 1888(Private Collection), was accepted to the Paris Salon in the same year. Elizabeth Nourse became well established at the Salon as a painter of peasant woman and children. She also painted genre, portraits, Arabs, markets, canals and flowers.

After establishing herself in France, Nourse returned only once to the United States in 1893, to visit with her family and see the World's Colombian Exposition in Chicago. During her life she traveled (often in the company of her sister Louise) to Russia, Italy, Austria, Holland, Spain, and North Africa where she was known to paint the exotic sites and inhabitants of the land she visited. She usually spent her summers either in Brittany, Normandy, or Saint-Leger-en-Yvelines, near Paris. Nourse called North Africa "the land of sunshine and flowers and lovely Arabs."

Her style was bold and strong and demonstrated a rather painterly quality that she was praised for both during and after her life. Nourse employed bold confident brush strokes and a strong sense of color and light that was derived from her training in Cincinnati, where Munich trained Duveneck had introduced "a taste for both picturesque subject matter and rapid painterly style." She often set her subjects against a rich contrasting background to further highlight the central theme.

Her works can be found in numerous important public and private collections here and abroad.She retired in 1924 and lived with and supported her older sister Louise throughout her life, passing away only one year after her in 1938.

Source:
Peter Falk, "Who Was Who in American Art"
Blake Benton Fine Art