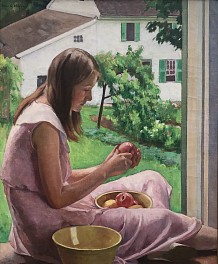 Born in the Ukraine, Ivan Olinsky moved to New York City with his parents sometime around 1890, and he began to study art at the Art Students League and the National Academy of Design.  At both schools, Olinsky eventually took teaching posts, remaining a member of the faculty for many years.  From 1900 to 1908, Olinsky served as an assistant to artist John La Farge (1835-1910), with whom he worked on mural painting and stained-glass commissions.  After this apprenticeship, he spent two years painting in Italy and France, spending much of his time in Venice.  When he returned to the United States, Olinsky set up a studio in New York City, which he maintained for the rest of his career, and, beginning in 1917, the artist and his family began to spend their summers in the Grassy Hill section of Old Lyme.

A much sought after painter of women’s portraits, Olinsky also produced still lifes and landscape paintings.  From early on in his career, Olinsky’s art was critically acclaimed, and throughout his life, he was an integral part of the New York and Lyme art communities.