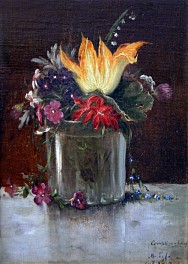 Max Eglau, highly respected Hudson-River School painter and teacher in New York City including grammar schools and Cooper Union, had his life ended by murder in his classroom at the School for Deaf Mutes in New York City in February 1896.  The murder was never solved.  Following is information about the murder, which appeared in newspapers and other online sources:

On Monday, February 10, 1896 at 2:15pm, Max Eglau's art students waited for his arrival.  When the professor did not appear after a few minutes the superintendent David Greene went to Mr Eglau's studio to look for him.  The elderly artist was lying on the floor dead.  It was a bloody mess.  Messengers were dispatched to nearby Mount Sinai Hospital.  The doctor arrived and declared that Mr Eglau had been dead for at least 45 minutes.  He had been killed sometime between 12:05pm and 1:30pm.  The time of Mr Eglau's arrival at the school was confirmed by Dwight L. Elmendorf, the chemistry teacher whose classroom was located immediately under the painting room.  Mr Elmendorf dismissed his class at 12:00pm and was walking downstairs as Mr Eglau was walking up, they met on the stairs.

Sergeant Hussey along with detectives Keating and Collins arrived from the E 67th Street police station located only half a block away.  The investigation was under way.  All the outer doors were locked and guarded and the entire building searched for some type of evidence which might lead the investigators to the murderer or murderers.  The search continued until 8:30pm when the day students went home.  The Institute for the Improved Instruction of Deaf Mutes is a residential school for boys and girls between the ages of 6 and 14 but anyone older than 14 can take classes as a day scholar.

The room where the murder was committed was on the fourth floor of the building on the 68th Street side.  Here, on the top floor of an extension of the main building, are two large rooms which were used as studios by Mr Eglau.  Each room is lighted from the top by skylights and by windows.  There is only one entrance to these two rooms from the main hall of that floor.  The room on the east side of the extension was used as a studio and a classroom for teaching modeling in clay.  The room to the west was a studio and a classroom for painting.  The first room which was for modelling had about five or six long tables where the pupils worked.  At the other end of this room, beside the door was a box in which the clay was wet and mixed, and beside that was a sink.  Between these and the tables, and opposite the door into the painting room, was a clear space.  It was in this clear space the the artist,  Professor Max Eglau was found dead.  Evidence showed that there was a struggle.

A Hudson River style painter and teacher, Max Eglau was murdered, suffering brain hemorrhage, under mysterious circumstances.  He was a teacher of oil painting and, having lived at 991/2 St. Mark's place, had entered himself as a resident for life at the Institution for the Improved Instruction of Deaf-Mutes, near the 7th Regiment Armory Building.  The school of several hundred enrollees, was for charity pupils, many wards of the state. He was murdered on the 4th Floor of the Art Building of the school annex, and .  Rumors circulated, later disproved, that the person committing the murder had intercepted his monthly checked and forged their signature to get the money, and also that his death had something to do with the ill will of the school Principal, who had unsuccessfully tried to borrow money from Eglau.

Arrested shortly after the murder were five young men, but their guilt was never proven.

** If you discover credit omissions or have additional information to add, please let us know atregistrar@askart.com.