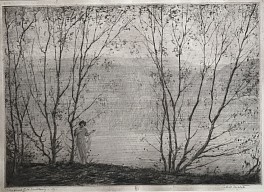 Born in Providence, Rhode Island, Robert Hogg Nisbet was a well-recognized painter.  He studied at the Rhode Island School of Design and at the Arts Students League in New York with Frank Vincent DuMond.  His training continued in France and Italy.  Work by Nisbet was exhibited at the Panama-Pacific Exposition in San Francisco in 1915, and the Smithsonian Institute.  From 1909 to 1910, Nisbet served as president of the Art Students League of New York.  In 1928, he was elected to Full Membership at the National Academy of Design.  Nisbet was also an honorary member of the Washington Art Association.  After settling in Kent, Connecticut, Nisbet founded and became the first president of the prestigious Kent Art Association.  Paintings by Nisbet can be found in the collections of the Detroit Institute, the Los Angeles Museum of Art and the Metropolitan Museum of Art.